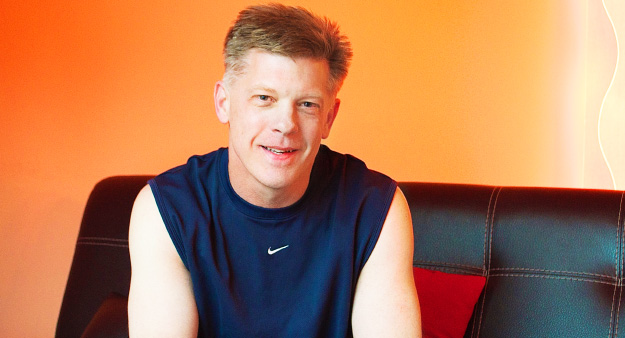 When I was younger, I played college football, ran marathons, jumped out of airplanes and crawled through the mud as an infantry lieutenant. For the last 16 years, I sat at a desk in an office working in finance and started to deteriorate from a fitness perspective. I finally had enough and bought a Dfly 10-class Groupon and did my first class in April 2012… oh, boy it was ugly! Fast forward 3 ½ years, 161 classes and 23 pounds later… lovin’ it! Unless you count jazzercise and aerobics in the ‘70s… kidding, not that old, I had absolutely no experience.

Two things I enjoy about Dragonfly, which are totally unrelated. First is the energy, camaraderie and vibe from the rest of the yogis, especially in the classes I take regularly along with many of the same people each week. Second, I really like getting a great cardio, strength and flexibility workout all at once. For 60-90 minutes, I don’t have to put an ounce of thought into what I am doing – No wondering which set is next, or how much weight or reps to lift, or what path to get the right distance running. Nothing. Our Jedi yoga masters do it all for you!

Where do I start on the changes in my total well-being since taking classes?? I’ve lost 23 pounds… I now weigh less than I have at any point in my life since high school! Since I began at Dragonfly, I have more energy, I feel like my metabolism has increased, my blood pressure is down 25 points, and I recovered from a hip replacement surgery last year in 4 months. I’ve also learned to stop, pause, and breathe in the moments of life far more often. Is this starting to sound like an advertisement?

I started with attending 2 classes a week, but now I attend 3-4 a week regularly – Katie’s Core, Suki’s Flow and Anna’s Flow. If you are going to force me to pick a favorite there is no doubt the one I can’t miss is Lynn’s Fire. Huge props to all the instructors, though – Carrie, Kaila, Kim, Erica and Kelly to name a few that I love to throw in when I can or when they sub!

Instructor Katie Frank: “It has been an absolute pleasure to observe Michael’s practice evolve over the last several months. Always willing to work, Michael is unabashedly up for any challenge proposed throughout class. Michael inspires those practicing along with him as well as the instructors guiding the class. Congratulations, Michael! The next elevated forearm plank will be in your honor!”

Instructor Lynn Lanning: “I love having Michael in class!! Whether taking or leading a class where Michael is present, he is truly an inspiration. He has a fierce “Dancer” pose, his questions and all that he has shared with me and other Yogi’s regarding his practice has been so valuable. His drive and determination are contagious! Michael has no doubt played a key role in making Thursday mornings (FIRE in Fitchburg) a wonderful sense of belonging, sense of community, and lots of fun! Thank you so much, Michael!!! Well-deserved and a HUGE congratulations!!!!