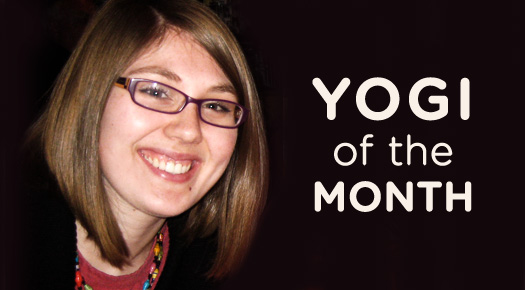 Madeline Oleson was just looking for a form of exercise that she could enjoy. And when her good friend Erica McCool started talking about Dragonfly Hot Yoga every time the two met, Madeline wanted to try out the hot room. The January Groupon brought her in.

Prior to Dragonfly Hot Yoga, Madeline had only done yoga on her Wii Fiit. But she says, “It’s been the first exercise experience where I’ve really enjoyed coming every time. I just feel great when I’m done. I’ve seen changes and felt changes not only in my physical body, but also just my happiness and just feeling good about life in general.”

Dragonfly Flow is Madeline’s favorite class. “Music really pushes me, so the Flow classes are great for that.” Lately though she’s been branching out; “Now that I feel really more comfortable with Flow, I’ve been trying Yin.” As for Fire, she says she was a little intimidated at first, but wants to try it again.

Madeline is a teacher at Lincoln Elementary school who works with fourth and fifth graders. She says that her yoga practice has helped her in working with the kids; “Sometimes just trying new ways with the kids, new approaches. It has helped with handling stress. I’ve been able to use breathing with frustrating students. It can be hard to stay calm, but just letting that go, not reacting to it in a negative way, I’ve really been able to use my breath to calm myself and think before you act.”

Madeline says that yoga has helped her be, “More open to pushing myself at times while remaining safe for my body, pushing myself to hold poses longer even when my legs are burning.”

And what’s next for Madeline?

“I’d like to try the 30 day challenge. I think the scheduling would be hard with teaching, but this summer I’ll have more time.”