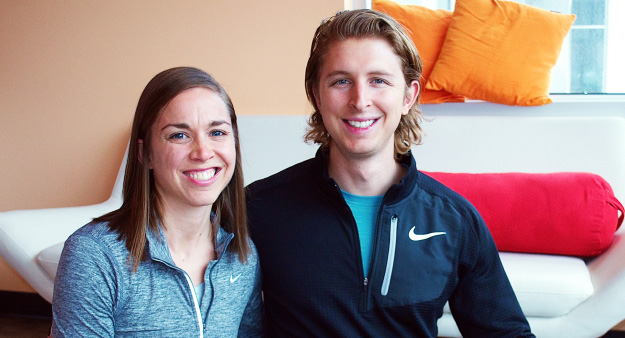 How did you get started at Dfly?
We wanted to take our haphazard yoga practice, which we were doing at home, following the video instructions of The Ultimate Yogi, and upgrade—to see how we would fare in hot yoga. Flow on Monday at 6pm downtown was the first class that we attended at Dfly, and it was the one that got us hooked for good. Katie Monk was the teacher at the time, and we fell in love with the perfect balance of emphasizing mindfulness and the pushing of physical limits that Dfly taught. Since then we have come to love all the teachers at Dfly. Each teacher’s unique style satisfies our practice in different ways, and it is refreshing to get different personalities on different days. A few Brady ‘freedom breaths’ on Tuesday Power Flow usually gets us primed for the week; while a contortionist’s twist guided by Anna during a weekend Flow uncovers the gateway to tear down the body’s perceived limitations with a little mental resilience. :)

What is/was your yoga experience before Dfly?
Kara had never done yoga prior to the home video series we started in Fall of 2016. To be honest, she was kind of a knotted mess of inflexibility at that time, and for her, yoga was more of a battle against her body than an expression of synergy between breath and fluid movement. Plus, the home practice never really fulfilled either of us, and she was leery of continuing. But, we decided to try a studio to see if a guided class and community would make our practice more holistic and rewarding. We found that in Dfly.

Jeremy had been introduced to yoga during his years playing collegiate volleyball out in California and had dabbled on and off during the years following, but never participated in any guided classes. His focus was always on the physical aspect of the practice and trying to find a way to “win” yoga. Now, he has mellowed out a bit and finds that consistent yoga is an essential part of his well being extending beyond just the physical. A fully engaged Lion’s Breath is now his favorite.

What do you enjoy most from attending Dfly classes?
No matter what the day has brought us leading up to a class, that hour of movement and sweat is a pause when we can be fully attentive to ourselves and really listen. Some days it is harmony, strength, and an inner fortitude with piercing focus. Others, it is a tussle with negativity and stiffness. In either case, there is an optimal response to pursue, yet it is so easily forgotten that we have the power to make any choice at all. Dfly teaches us that we have that choice and gives us the time and space to slow, pay attention, listen to what we are telling ourselves, and respond accordingly. Without yoga, it is difficult to find those opportunities. We are both extremely grateful that we can have those moments at Dfly.

Have you experienced any changes in your total well-being since taking classes?
The short answer, is a resounding “Yes”.

Sunday morning has turned into our time for resetting. We recently started attending the Fusion 75 class in Fitchburg and that class has re-framed our expectations for what a difficult yoga class can feel like. Even though it isn’t a competition, Kara is winning in Fusion 75. I (Jeremy) have only made it through a full class once without a break.

That class has been a significant multiplier for improvements in all areas of yoga and life. It is challenging in every facet, from mindfulness to physical strength. The best (and, possibly the worst) part is that you know exactly what you are getting yourself into every time you step into class. Regardless of the class, though, we find that we sleep better at night after a tough yoga session and can move more gracefully throughout the day with both a calmer mind and more stable body.

How often do you attend classes? Favorite class?
Kara went on a tear for about 4 months during a mini-retirement that she was taking, which included frequent double days. Jeremy lagged behind, but where he lacked consistency, he tried to make up for it with sheer will. Now, we have settled into a routine of about 3-4 yoga classes per week, which typically includes a mix of Fusion 75 and the various Flows.

Our favorite class, as mentioned before, is Fusion 75. The increased heat and difficult, repeating poses always make for an interesting class. Jeremy has coined the phrase, “Letting out the demons” in regards to that class, because it requires digging deep every time Kelly decides to pop another couple breathes onto the already strenuously long poses.

Instructor Natalie Koberstein: “Jeremy and Kara often attend class together, and I love to see them next to one another, individual in their focus, but also clearly united in their support of one another. Kara’s practice grows stronger and more intentional with each class she attends, and Jeremy’s is mindful of what his body needs on each particular day. They are kind and warm to those around them, and quick to share a smile! Thank you for being a part of our Dragonfly community!”