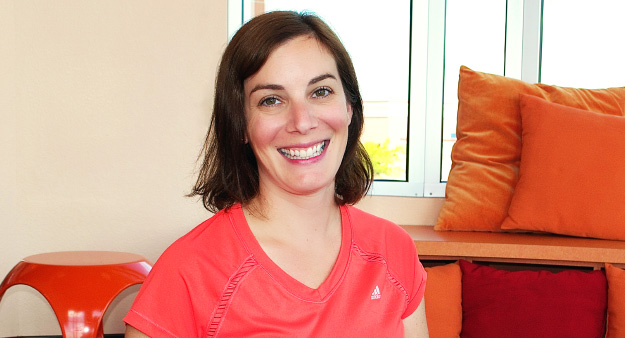 I moved to Madison two years ago and used a Groupon to check out various fitness options. I was very excited when I came across the BarreAmped classes at Dragonfly. I had done barre a few years back in Chicago but was on hiatus from it as it wasn’t easily accessible to me in Milwaukee. I got the Groupon, came to Dragonfly and was hooked. I joined as a member and at first mostly did just barre or the barre boot camps. Slowly but surely I started checking everything out.

I had taken very little yoga and I have not belonged to a yoga studio before. I love the variety. Dragonfly has a class for whatever mood I’m in, BarreAmped if I want to shake, Power Up if I want to sweat, Yin to chill and the occasional Flow if I’m in the mood for something different. Exercise is a great stress reliever. One thing I’ve learned about myself since being at Dragonfly is that what my mind needs for exercise really varies. I had previously gotten into the rut of doing the same thing (kickboxing mostly) over and over again. Each Dragonfly class offers a different way to zone out and focus on the moment. And the Yin classes, oh those Yin classes. Sometimes I have to take a minute before leaving because I’m half asleep.

I attend classes most days of the week, as long as my schedule will allow! If it were up to me, I’d be there every day. My favorite class is the one I make it to. It really varies what I need that day; Dragonfly has taught me to honor that. I go through stretches where I just love, love, love getting sweaty in Power Up. Then there are times where there is no way I want anything but BarreAmped. And of course, occasionally Flow calls to me and it is nice to slow down. Dragonfly has become such a wonderful place for me. The instructors and desk staff are all so friendly, just walking in they make you feel like you have made the best decision of your day by coming in and that is usually the case. While I joined for BarreAmped, I’ve stayed for all of what Dragonfly stands for.

I moved to Madison two years ago and as a sports medicine physician, I quickly found out that the Madison community is very active in yoga. Patients would come in and say they had pain with certain poses. I would have to ask them to describe the pose then google it after their visit. That only gets you so far! So I initially took a few Flow or Slow Flow classes to learn more. Sometimes I did not quite understand how that particular pose would hurt someone so I would pick the brains of the instructors after class. (A big thanks to the instructors for their help!) It was wonderful to bring this knowledge back to the clinic, no longer having to ask what Chaturanga was or offering advice to either rest or modify poses has really helped build relationships with my yogi patients.

Instructor Kim Guenther: “Beth is another great example of what our studios are all about. She has such a well-rounded fitness and yoga practice. She’ll take anything from Aroma Yin and then go to Power Up. She really participates in the variety of class offerings here, and she does it consistently. As an instructor I love seeing our clients participate in more than one type of class, as it allows them to cross train and see the benefits of that variety. Beth lights up the studio every time she graces our door with her enthusiasm and smile. She makes my day brighter every time she comes to visit!”

Instructor Katie Frank: “It has been such a pleasure getting to know and instruct Beth in BarreAmped and yoga classes. She always arrives with a positive attitude and a willingness to do the work despite the challenge each class presents. Thank you, Beth, for continuously reminding us what we love about our Dragonfly clients! Keep up your amazing commitment to health and fitness!”