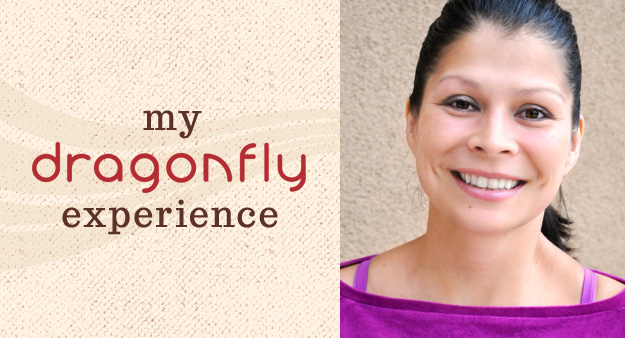 For years I was intrigued by yoga but I was intimidated by the idea of “yogi’s.” In my head a “yogi” was a toned, ripped body that could contort themselves, for hours on end, into positions that only the demonically possessed could do. I had attempted classes at various places but the intimidation was ever present. The concept of yoga made sense to me and I really wanted to be that healthy ripped body but I hadn’t found a teacher that could help me get over the intimidation. I really wanted to love yoga but it wasn’t happening…yet.

I continued my yoga journey with a trial membership at Dragonfly Hot Yoga. Dragonfly appealed to me for two reasons: First, I love warm temperatures and let’s face it – in Wisconsin heat is a brief experience (before this summer anyway). Second, I have ankylosing spondylitis, an arthritis that affects the spine. I was diagnosed at 23 years old (I’m now 36). In the last 13 years I had tried everything holistic to cope with this problem. I tried Pilates, walking, changed my diet, went gluten-free, and lost weight. While these are all good things they didn’t alleviate the pain or stop the progression. During this time, doctors wanted to prescribe different medications but I refused because of side effects. The only thing I would take was ibuprofen to help when the pain was excruciating. However after 13 years of that choice all I got was an allergy to NSAIDS and a lovely skin rash that pops-up at random (yes those warnings on the bottle are true). So in 2009 I agreed to begin Humira injections which did help with the pain but it hadn’t improved my range of motion.

In November of 2011, I went into Dragonfly for their introductory special and words cannot express how happy I am that I did. During my first class I knew I was in for something special when my knees began to sweat, MY KNEES! I went to classes faithfully during the introductory period and then signed up for a longer membership. In February 2012 I had to go in for my yearly check up with the rheumatologist. At every visit she measures my range of motion in the lower spine. To do this, she has me bend over and touch my toes and then measures how my lower back curves. The scale is 1-5 inches; 5 inches being the optimal healthy spine and the lower numbers not so much. Three years ago (2009) my measurement was 3 inches, the next year it was 2.5 inches- I was getting worse. But my visit on February 14, 2012 (3 months and two days after doing yoga regularly at Dragonfly) my measurement was 4.5 inches which is almost an optimal healthy spine! My Doctor measured twice and re-checked my file before telling me the good news then she asked what I had been doing. I told her the only change was yoga.

As someone with arthritis I understand how debilitating it can be. For me, there was never a day that I was able to forget that I had arthritis. I mean, standing, sitting, lying down, coughing, sneezing, and laughing all caused me pain and there was never a reprieve. That is a heck of a way to live. While Humira injections have helped the symptoms of pain, it didn’t help with the root problem of spinal motion and rigidity but yoga has and my numbers don’t lie.

The warm temperatures at Dragonfly seem to help my muscles before and during class, the variety of classes challenge me, and the variety of teachers I value most of all. Each instructor teaches with a different moxie and their passion for yoga is a separate entity I feel in every class. More importantly, every teacher emphasizes the fact that yoga is a practice not a path to perfection. This is what I needed to hear. Hearing them say this, repeatedly, has removed the expectation I had all these years. Don’t get me wrong, I still watch other people in class and wish I could do what they do but then I’ll hear Natalie say, “Fake it till you make it” and this pushes me to focus on my practice not someone else’s.

While I may not be able to spider walk down a flight of stairs while vomiting pea-soup, I know I’ll get there because I am a yoga-lifer. I still marvel at the news my Doctor gave me and I hope that other arthritis suffers will give yoga a try and receive the same great news I did.