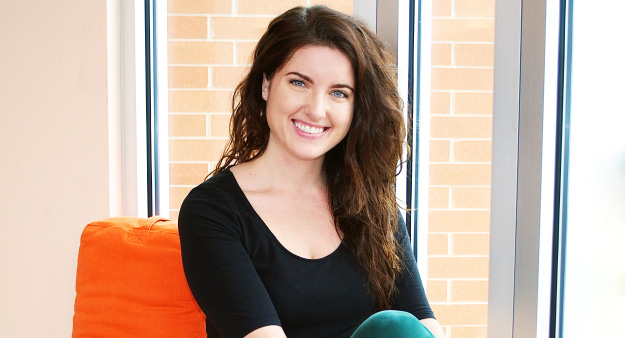 I started going to Dragonfly in 2014, shortly after I moved back to Madison from Seattle. I was missing my yoga studio in Seattle and feeling doubtful I could find anything like it in Madison. I bought the intro month deal to Dragonfly thinking I’d only stay for a month, then move on to other studios’ intro deals. Halfway into my month, I knew I found the perfect studio for me.

Before Dragonfly, I had quite a bit of experience with yoga. I think I must have been about 15 when I took a few yoga classes at a gym in my hometown, Eau Claire. As a freshman in college in Milwaukee I signed up for a 2-credit yoga course, thinking it would be a nice, relaxing addition to my academic schedule. I had no idea that the type of yoga I signed up for (Ashtanga) was one of the most physically & mentally challenging types of yoga that exists. That course in Ashtanga turned out to be my favorite class I ever took in college; in the academic classrooms I learned about various subjects, but on that donated blue yoga mat in the upstairs of a church, I learned about myself. I completed yoga teacher training in early 2014 and will occasionally teach on a volunteer basis at events in the community. My experience with BarreAmped is a different story; I had zero experience with BarreAmped before Dragonfly, and even when I started at Dragonfly it took me a while before I warmed up to trying a BarreAmped class. But I eventually did, and now I can’t stop! I try to go to 1-2 BarreAmped classes a week. Sometimes I find it just as mentally challenging as a yoga class.

It’s hard to pinpoint what I enjoy most about attending Dragonfly classes. I appreciate that no matter what is going on in my life, Dragonfly is always there, warm (hot) and welcoming. I appreciate that the vibe is not competitive, and it doesn’t matter if I nail an arm balance or if I want to spend half the class in child’s pose; I feel supported either way. As far as changes I’ve seen in my total well-being since going to Dragonfly, I know I am physically stronger than I’ve ever been. I never lifted weights before Dragonfly, but now after hundreds of Yoga Up and BarreAmped classes, I’ve definitely built strength and my sisters have told me I need to stop snapchatting them pictures of me flexing.

My attendance ebbs and flows. Sometimes it’s 7+ classes a week, and there are times when its zero classes a week. There are classes that I hate to miss though: Core Flow + Yoga Up with Tiffany on Monday nights in Fitchburg and Barreamped with Sam on Tuesdays in Middleton. I try to get to Erica’s Flow class when I can, particularly since I know she shares my appreciation for a wide legged forward fold. When I was in grad school, the 5:30am classes were my jam. These days, I rarely get up that early anymore, except for the occasional 5:30am Friday Flow with Suki, which is when I get my Ashtanga fix in. Dragonfly is so much more than a yoga studio to me. Some of my best friends are either people who work at Dragonfly or people I’ve met through people who work at Dragonfly. It is my community and will always have a special place in my heart!

Instructor Caroline Anderson: “I just love having Caitlin in Yoga Up! Her energy and strength (both physically and mentally) are impressive. She has a positive attitude and always comes to class with a smile – even during tough YUP classes! She works hard to get the most out of class and inspires those around her. Way to go Caitlin!”